The 10 Biggest Apple Stores in The World

Back in 2001, when Apple decided to open a series of retail stores, a lot of pundits questioned this idea, but now the time has shown that this move was incredibly smart and well-thought, in order to build the brand recognition and awareness. Today in 10 countries with over 283 locations, Apple stores are serving an average of 12,700 visitors in one week on each store.

Just like their products, each Apple retail store is designed and constructed to catch the eye of the visitors and gain Apple’s reputation as the purveyor of all modern and cool things. The Apple Corporation has received loads of architectural awards for its store designs and out of many trend setting features of Apple stores, the most popular one is a big fancy for glass, almost all things are made of glass that give a very unique touch to the buildings.

To emphasize our point, we are mentioning our 10 picks of the biggest and most inspiring Apple stores around the world. Each of these Apple stores has its own distinctive elements and serves as the flagship home basis for the brand.

Largest MOST Popular Apple Stores in The World

Apple has recently inaugurated its first official store in Middle East, which is also the biggest store of the company in the world. This is the first Apple retail store in UAE, but not the only one as exactly 3 hours after its opening, Apple opened another one in Abu Dhabi. This Apple store boasts the main Apple theme of wooden furniture along with Dubai’s signature green trees.

Before the Apple store of Dubai, this was considered the largest Apple Store in the world. It is created as the 99th story with the selling space of over 28,000 square feet. It is actually situated in the historical building that was the house of famous Thomas Cook Travel Agency. Right now, this Apple retail store is owned by the English monarchy, which means when Queen Elizabeth wants to buy any Apple product, she buys it here.

This store is now the 3rd biggest Apple store in the world and not only that, it also features the longest Genius Bar of any location to provide customer help to consumers. It has another more interesting claim to fame, which is that it boasts the largest logo of the brand along with the largest seamless glass panes in its storefront.

This is the largest Apple store in U.S and reportedly has over 20,000 square feet of retail space. It is defined by the three storey modern glass storefront that is a typical Apple store design along with a plenty of shelf space for the products of course. This store features a really unique roof, which is the pleasant home to a garden. 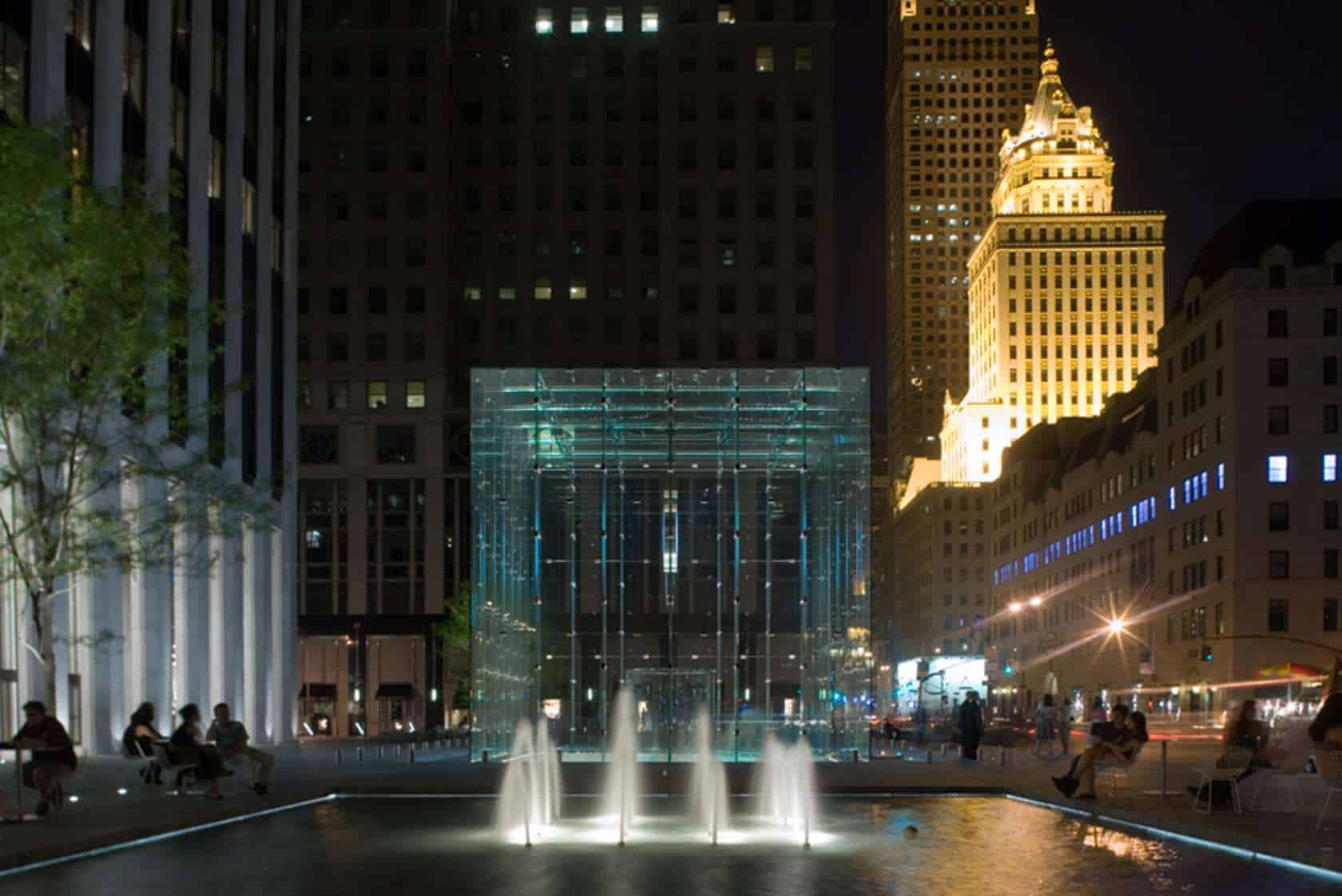 This Apple retail store is considered one of the most recognizable locations around the world due to its iconic glass cubic entrance that attracts thousands of fans, who wait in the line to pick the latest product of the company. The location of this store, which is on the corner where Central Park meets Fifth Avenue is also the source of attracting tourists around the world, who cram inside throughout the whole day, just to catch a glimpse of the store’s underground floor space. It is actually the 147th Apple store and isn’t very large as compared to other large stores, but it is obviously one of the most famous Apple retail stores around the world.

Unlike many popular stores, which are famous for the metal detailing and modern glass, this Apple store sits in the 130 year old building that was restored by the company. This building often comes under constant praise and criticism for its really unique architectural design interior as it is covered in end to end details, which gives it a romantic vibe, thus keeping up with the French Tradition. Overall, this store boasts the combination of brass and stonework, mosaic floor tiling and sculpted ceilings that shows off the architectural creativity, making it a must-see location.

This is the five-story Apple Store located in Ginza, a district of Tokyo. It was the first store outside of US and is the tallest one in the chain. The staff of this store is highly trained and most of the employees speak over 10 languages. This store is known for its unique elevator design as it has latest floor by floor information displays and there are no buttons.

This is the first store Apple opened in mainland China, the company’s first move in to the major Chinese consumer market. This Apple store is mainly aimed towards the locals and not visiting tourists, which clearly signifies the brand’s intention to convert the Chinese people into loyal Mac consumers. This retail store is famous for its big box structure. 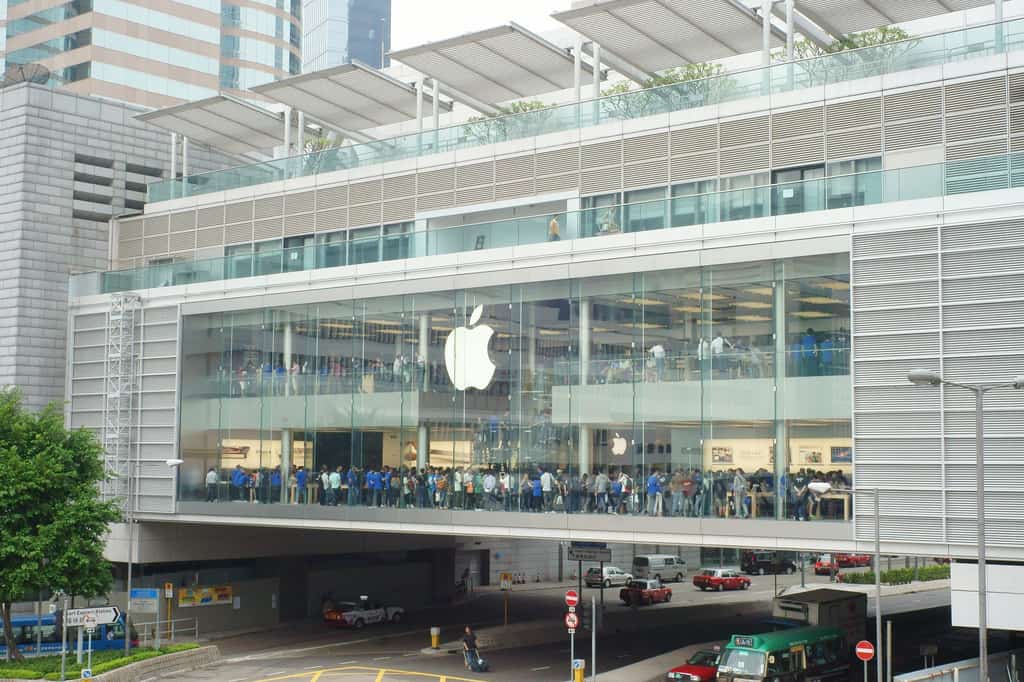 This store in the first one in the Hong Kong, a two storey building connected to the shopping mall. After taking a few steps inside the store, visitors are greeted by the signature glass staircase of Apple retail store along with an oversized Apple logo and the background view of Hong Kong’s cityscape.

In Berlin, Apple has installed a store in an opera house that was built in 1913. The building gives a very historic and royal look with the traditional touch of the country’s culture. The walls of this Apple retail store are made from limestone and the latest products are displayed on thick German oak tables.

Have something to add to this story? Share it in the comments.

This site uses Akismet to reduce spam. Learn how your comment data is processed.